Why the Hemp Plant vs the Cannabis Plant

The hemp plant is richer in CBD percentages and can test upwards of 15% CBD, while maintaining a THC level of less than .3%. The hemp plant is considered hemp when it tests and contains less than .3% THC. The hemp plant is legal on the federal level. Hemp is also rich in amino acids and omega fatty acids. The fibers of hemp can also be used in many commercial and industrial products like paper, building materials, compost and clothes. The whole hemp plant is used throughout the process. The cannabis plant is rich in THC, and can test in upwards of 30% THC, while containing much less CBD than its hemp counterpart, usually in the 1-5% range and is federally illegal to grow and possess.

What is CBD Isolate?

Isolate CBD is the purest form of CBD available, testing around 99.99% CBD and can be found in both crystalline and powdered crystal form. Isolate contains only one cannabinoid, CBD. Isolate is made through a 3-step extraction process in order to get the CBD isolated to its purest form.

What is Full-Spectrum CBD?

Full Spectrum CBD is an oil rich in CBD but also contains low levels of other cannabinoids such as CBG, CBN, CBC and THC. It contains all the beneficial compounds from the hemp plant, including naturally-occurring terpenes, essential vitamins, fatty acids and proteins. Full Spectrum CBD may have a more synergistic effect than pure CBD isolate, which is often referred to as the ‘entourage effect’. Full Spectrum Oil usually tests at around 75%-90% CBD and must test at less than .3% THC. Full Spectrum Oil is extracted by a 2-step process.

Wait, what the heck is a Cannabinoid?

Will I Pass a Drug Test?

There is always a risk of failing a drug test, and if you are concerned with this we recommend using our isolate products. Our Isolate CBD products contain 0% THC. The CBD isolate we use here at Lost Range is tested at 99.99% CBD. Our Full Spectrum CBD products contain less than .3% THC and contains other cannabinoids such as CBD, CBG and CBC.

Where does our Hemp and CBD come from?

Our Hemp CBD products are derived right here in Colorado. The hemp is grown under the Colorado sun by local farmers who ensure a pure product. The hemp is also extracted here in Colorado and those extracts are then used in our small batch, handmade hemp CBD products. Our products are a true full circle product supporting an array of local Colorado grown small businesses. We all really appreciate your support!

What does CBD do to you?

CBD can support both the body and mind in a variety of ways. Most common benefits include alleviating stress and anxiety. CBD allows for a calming sense of relaxation, focus and balance.

Does CBD get you high?

The short answer is no; CBD won’t get you high. THC is the psychoactive compound in the cannabis plant that creates the feeling of being “high.” As discussed above, all of our full spectrum products contain less than .3% THC and our isolate products are 99.99% pure CBD. While both CBD and THC interact with the endocannabinoid system, they are completely different chemical compounds. THC acts on CB1 receptors in the brain to produce an intoxicating effect, while CBD doesn’t directly interact with any receptors that cause that sensation.

Are there any good CBD podcasts?

We recommend checking out the following Podcast

What is the entourage effect?

What Ingredients do you use?

We source the highest quality ingredients for our products. Click HERE To view the complete list of ingredients.

What is your extraction process?

At lost range.® our raw, bulk CBD is sourced from Hotchkiss Colorado from a close business partner of ours who has been in the CBD farming business since legalization. All of the hemp is grown in that surrounding area using organic practices by a Co-Op of farmers who have small operations (100 acres or less). The majority of our hemp’s journey starts in greenhouses as seed or clones, and is then planted, by hand, into the fields.

When the hemp is ready for harvest, it goes through a rigorous 3rd-party testing process outlined by Colorado state law. This testing process or “panel”, checks for potency, molds, microbials, mycotoxins, heavy metals, pesticides and moisture. The hemp is tested pre-harvest and post-harvest. The hemp must pass the state testing panel or it will be destroyed and disposed of.

The extraction process used for the CBD Distillate and Isolate* is what is referred to as “Cold Ethanol Extraction”. All the equipment used in this process is made in the USA and is hand-fabricated stainless steel ‘stamp’ certified by Federal, State and Local officials. Throughout the process of extraction and refinement, these systems are what's called a “closed loop” system. Meaning each stage is performed in a closed loop where the material and solvents (i.e. ethanol) are never exposed to the atmosphere until the solvent is fully recovered to be used again.

The first process is what is referred to as the soak or wash, in which the hemp is washed in a pure and cold ethanol (between -40 to -50C) in a machine much like a big commercial washing machine. The cold ethanol helps extract the beneficial elements from the plant like cannabinoids and terpenes while leaving behind unwanted materials like lipids (fats) and chlorophyll. After the extraction or wash is complete, it is spun in the machine allowing the ethanol to be moved into a separate vessel for the 2nd step. This allows for the spent hemp to be virtually dry and free of ethanol solvent. Once this step is complete, the hemp is distributed into a large tote to air dry where it is then used by others for compost, mulch, animal feed, fertilizer or other uses/practices. This system has a solvent recovery rate of 99%+ depending on the system and operator.

The second process is the recovery of the ethanol. The ethanol - while still under a vacuum and closed looped system - is then ready to be recovered and separated from the oils that were extracted. This process is used by means of a “falling film evaporator”. In basic terms, the ethanol is poured over heat in a vessel which turns the ethanol into a vapor where it is then cooled and collected back as a liquid in a separate vessel. This separates the cannabinoid oils and terpenes from the ethanol and allows for the ethanol to be re-collected to be repeatedly used for further extractions. The result of this process is what is called “crude cannabinoid oil”. These systems have a reconversion rate of 97-99%+ depending on the system used and the operator. Great quick basic video of how this work: How Falling Film Evaporator Works

Step three is the Decarboxylation and degassing of the crude oil. This process involves heating the crude oil to release carbon dioxide and any remaining solvents from the oil. This helps purify the oil while also activating the cannabinoids. This activation is a crucial step as it makes the oils clean, effective, psychoactive, and potent.

Step four in the process is refinement of the crude oil. The crude oil will now move on to the distillation process and into a wipe film distillation machine. This will refine the oil of impurities while making the oil more potent. This refinement basically removes unwanted oils turning it into a high grade Distillate referred to as Full Spectrum Oil*(or Distillate). This oil is now a gold to light yellow oil in appearance and will have a potency of 70-90+% CBD. It will also have trace amounts of other cannabinoids such as THC, CBG, CBN, CBDA and more.

Step five in the process is further refinement of the Distillitate or Full-spectrum oil by transforming it into an Isolate which is a pharmaceutical grade oil/crystal. In this refinement, you are “isolating” a cannabinoid from the oil to obtain a 99.99% pure product, in this case CBD. This stage requires the distillate oil to be placed in a reactor and washed with Pentane. Under pressure and extreme cold temperatures, the Pentane causes a chemical reaction and allows for the CBD to crystallize and separate from the rest of the oils. Once this is complete the Pentane is cycled back to a holding tank to be used again which is often called the “Mother Liquor”. The end result is a crystal that has a fine powder consistency, is 99.99% pure and is known as CBD Isolate.

Step six is the Isolate powder is then moved into a vacuum oven which puts the powder on low heat and vacuum. This process further purges any remaining solvents in the crystal and readies it for infusion into products. CBD isolate is the pharmaceutical grade of CBD and should have a potency test of 99.99% purity.

It’s important to note that before the Distillate/Full Spectrum Oil or Isolate is sold or distributed, it goes through the same rigorous testing panel the hemp did for potency, molds, microbials, mycotoxins, heavy metals, pesticides and moisture. This ensures that the products are safe to consume and adhere to State and Federal regulations.

What is a Closed Loop Extractor

Lab Society is another great resource for further learning the processes in a more scientific manner. There is a header at the top that explains the full cycle. Please note there are many different ways to complete this process including many different machines and apparatuses to get to the final product. Initial Cannabis & Hemp Extraction Process

*Full Spectrum Oil (or Distillate) - Full Spectrum CBD is an oil rich in CBD but also contains low levels of other cannabinoids such as CBG, CBN, CBC and THC. It contains all the beneficial compounds from the hemp plant, including naturally-occurring terpenes, essential vitamins, fatty acids and proteins. Full Spectrum CBD may have a more synergistic effect

than pure CBD isolate, which is often referred to as the ‘entourage effect’. Full Spectrum Oil usually tests at around 75%-90% CBD and must test at less than .3% THC.

*Isolate- Isolate CBD is the purest form of CBD available, pharmaceutical grade and testing at 99.99% CBD and can be found in both crystalline and powdered crystal form. Isolate contains only one cannabinoid, CBD. 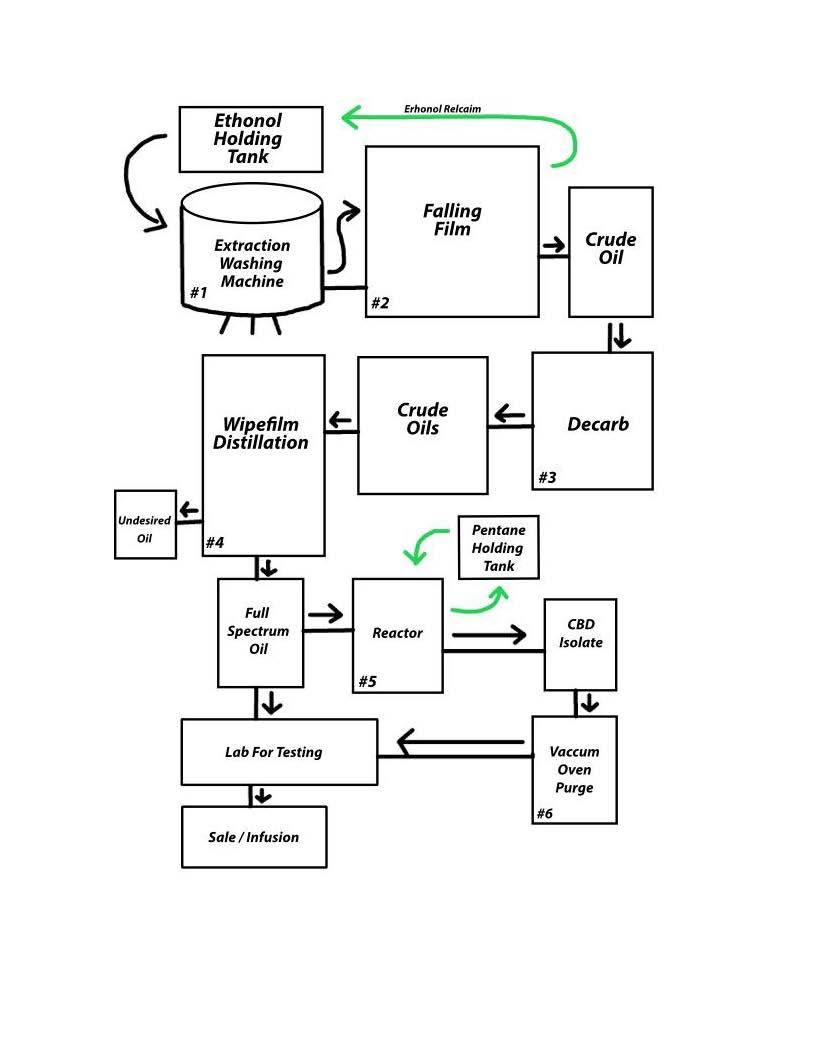 We source the highest quality ingredients.